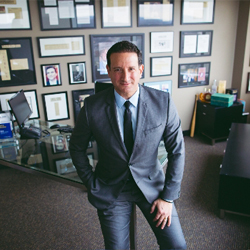 Rockind began his legal career as an Assistant Prosecuting Attorney in the Oakland County prosecutor’s office. Rockind served as an assistant prosecutor from 1993 to 1997 and handled hundreds of criminal cases, many of which resulted in jury trials. Rockind quickly became a special prosecutor, a coveted role given to prosecutors who were specifically assigned to handle complex and high profile cases.

In 1997, Rockind changed direction and pursued a career as a criminal defense lawyer, quickly establishing a reputation in private practice as the go-to attorney for difficult, high profile cases. Rockind is admitted to practice before the United States Court of Appeals for the 6th Circuit, the United States District Courts for the Eastern District of Michigan, Western District of Michigan and the Northern District of Ohio. He has been admitted pro hac vice in various state and federal courts across the country. He earned his Juris Doctorate from Wayne State University Law School and a bachelor’s degree from the University of Michigan.

No lawyer has been more at the center of medical marijuana defense than Neil Rockind. Rockind has been lead counsel in some of the biggest and most groundbreaking medical marijuana cases in Michigan. His clients include owners and operators of Clinical Relief, Herbal Remedies, Stoney Creek, Bluewater Compassion Center, Relief Choices and more. Many of these cases were cases of first impression or first of their kind type cases. Rockind has defended hundreds of patients and caregivers in the defense of grow operations industrial, large, small and personal.

Rockind has lectured and presented to groups across the state including for the State Bar of Michigan, the Oakland County Bar Association and the Wayne State University Law School Marijuana Symposium and the Institute of Continuing Education to name a few. Rockind has presented to business groups and corporate law groups and has offered testimony before the House of Representatives on marijuana law reform. In fact, when Karen O’Keefe and the Marijuana Policy Project needed representation in a federal suit, they turned to Rockind to represent them. Rockind is on the board of the Marijuana Patients Organization and is on the advisory board of My Compassion.